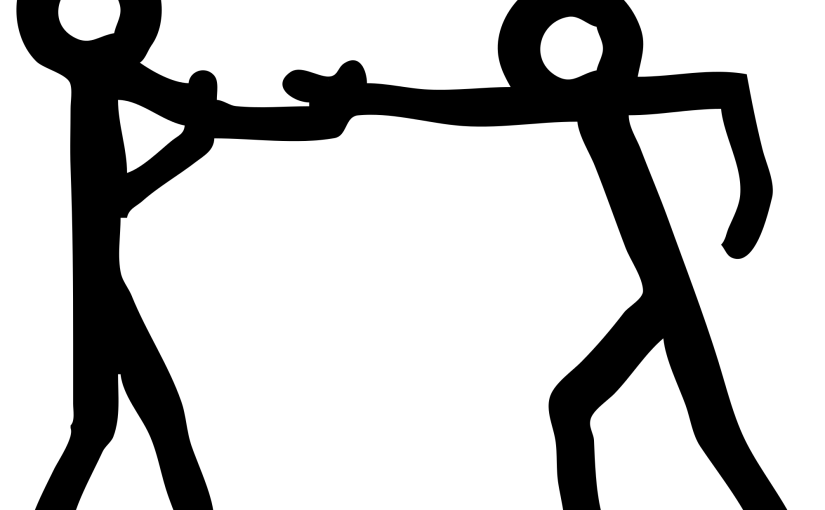 Once when Joshua was by Jericho, he looked up and saw a man standing before him with a drawn sword in his hand. Joshua went to him and said to him, “Are you one of us, or one of our adversaries?” He replied, “Neither; but as commander of the army of the LORD I have now come.” — Joshua 5:13-14, NRSV

With the shooting of Botham Jean by a Dallas Police officer and the killing of Garrett Hull, an undercover Fort Worth officer, we here in the Dallas-Fort Worth area have seen another set of contributions to the national “debate” regarding police officers and their treatment of people of color. I render “debate” this way because we aren’t truly debating, whether it be this or any other issue. Debate is a discussion in which two positions interact for the purposes of finding the truth. It is a conversation that happens in community. What we are doing these days is more like screaming at each other from inside our own little boxes.

What I mean is that both people of color and police officers have experiences that are true. People of color were never intended to have an equal share to success and dignity in this nation, and we are in the midst of historical growing pains as we try to overcome a prejudicial narrative that spans over two hundred years, made more difficult by the tendency to devalue certain lives based on whether or not they meet a fickle set of standards in the eyes of the public. On the other hand, police officers are often under-trained, under-paid, and unsupported as they enter into situations we’d all like to pretend don’t exist. They are tense, and they have good reason to be, especially when a routine traffic stop or sitting on a lunch break can become deadly activities.

Families of police officers are fearful every day that their loved one might not make it home. This feeling is both shared and amplified in communities of color, whose fear is actually stoked by the sight of a blue uniform. Further, both officer families and marginalized citizens earnestly desire justice and peace for those they love.

These commonalities, however, are largely ignored in our national dialogue. A motto as specific as “Black lives matter” chafes a public that is still not at peace with its own history, and is misrepresented as an attack on law enforcement and all other lives. Meanwhile, officers are demonized, killed, and blamed individually for systemic issues. To make matters worse, inflammatory rhetoric surfaces that further deepens a divide that never should have been there, putting all parties in greater danger.

So what do we do?

So far, it seems to me that we pick our “box” and scream at those on the other side, blaming “those people” for the present state of our country… and the world loves it. The world is all about handing us two human-made sides from which we must choose. We cannot stay in the middle, for this is a most unacceptable neutrality. When it comes to our politics, religion, or this specific example of Black and Blue lives being pitted against each other, we must exclusively decide.

I’m done, and I hope you are as well.

The truth is, there is no reason to “pick a side” in this worldly debate. Why? Because understanding and reform are needed across the board if we want this nation to move forward with justice and peace. When citizens feel safer, officers are safer. When officers feel safer, citizens are safer. Too much overlap exists for there to actually be exclusive “sides” in this (or any other) national issue.

To illustrate this, I’ll share a conversation I had with an Orthodox priest from Ferguson, Missouri, who was chaplain to both police officers and protesters in the wake of the killing of Michael Brown by a white police officer. During one protest turned riot, looters from surrounding areas had started tearing into a local food pantry. Within seconds, protesters, who were ahead of police forces, performed a citizen’s arrest, locking arms and barring the perpetrators from leaving the charity until officers arrived.

“There,” he said, “in the midst of all that chaos and shouting, I saw hugs exchanged, tears shed, and finally, everyone understood that they all wanted the same thing.” The priest went on to say that even in separate consultations with police and protesters, he found the concerns of both to be similar in every way. They all wanted justice, they all wanted peace, and they all wanted everybody to be okay.

My own experiences testify to the truth of his claims. I have marched in and been a part of Black Lives Matter protests and events. I have also sat with my father-in-law and the rest of my wife’s family in fundraising dinners in honor of fallen police officers. I’ve listened to my Black brothers and sisters and my police-related friends and family as they all described the horrific fears and realities that face them on a daily basis.

So what do we do? It’s true that we can’t just sit neutral, but I also believe that just picking one of the “sides” presented to us is far too simplistic. This is where the text at the beginning of the article comes into play.

At this point in Joshua’s story, he is preparing to attack Jericho. He sees a representative of God, and asks him which side he is on. Notice what the angel says. “Neither; But as commander of the army of the LORD I have now come.” The Hebrew word the NRSV Bible translates as “Neither” actually means “no.” God is not on any particular human-made side. God is on the side of righteousness, and perhaps that is the side we need to be on as well.

It is not righteous to use our experiences to judge or dismiss those of other people. We are not acting righteously if we do not recognize that God weeps for all who suffer, including our officers and brothers and sisters of color. Progress is not found in vengeance, violence, or one-sided narratives aimed at deepening social and cultural divisions. God’s desire is for all of His children to fully live, and the hatred, suspicion, and fear that so frequently guides our interactions these days will not help us honor that desire.

For us to be righteous, we must recognize that God’s image rests on all people, and they should be treated accordingly, regardless of their race, occupation, economic class, or even their misdeeds. We can’t go on only mourning officers or civilians, without striving to make life better and more sustainable for both. We can’t continue allowing the world to tell us who our enemies are and how we treat them.

We shouldn’t be afraid to specifically say, “Black lives matter.” It shouldn’t insult us, nor should we fail to understand the greater context behind the phrase, as it represents a continuous struggle that is not limited to (or even primarily about) interactions with police officers. It’s not a concept we should feel the need to argue with.

We also shouldn’t be afraid to support and respect our local law enforcement officers. The vast majority of our American brothers and sisters who enter this type of career do so out of a desire to do good things for their families and communities. While systemic issues do lead to particular biases, these problems are largely not conscious, and result from the day-to-day experience of officers in the areas they serve.

By the same token, being righteous means we have the courage to honestly look at what’s wrong within ourselves and our communities, as there are real issues that need actual attention. Such examination necessarily includes police and other institutions that impact our lives. When we let go of allegiances that blind us to suffering, we are free to question any practice or institution that denies equality, justice, and safety to any to our people.

I know this is a lot to think about. I am also sure I run the risk of pissing off a lot of people with what I am saying, as no one likes their reality to be challenged. The truth is, however, that progress and growth are impossible when we keep digging our heels in without taking time to listen with our hearts and minds open. It sounds like hippie advice, but take a look at our society and tell me with a straight face that what we are doing now is working out well. I’ll wait.

Can’t do it can you? So let’s try something different. Let’s prayerfully approach this and all other issues with the understanding that we all want a better future. Let’s acknowledge that we don’t have all the answers, and all we can do is offer our experience while being truly open to the experiences of others. Let’s strive to find our common ground and then try to discern together what a better way forward might be.